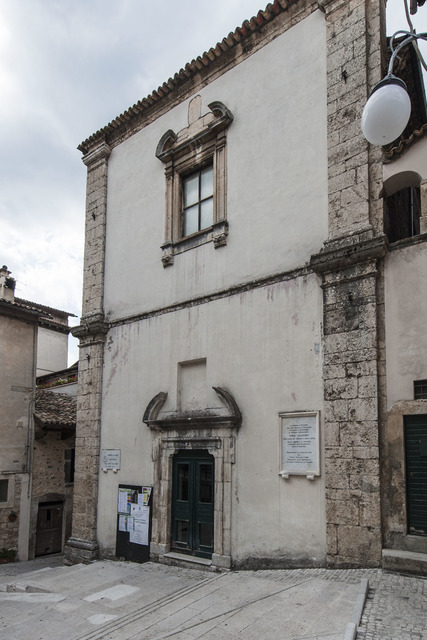 The Church of the Holy Souls in Purgatory - located on the main road of the village, called the "doughnut" for its ring shape, - has, since 1991, been the Auditorium and regularly hosts both musical and theatrical performances, film screenings, exhibitions and conferences.
It is presumed to have been built in the late 17th century and was rebuilt soon after, with contributions from both the local comune and from private citizens, following serious damage by the earthquakes of both 1703 and 1711. Its consecration then took place in 1716. A plaque inside recalls that in 1727 the priests assigned to this church were buried here, in a space specially made below the floor, which presumably was accessible from the outside through the openings which are still present on the side wall, on the left of the facade.
Later the church was deconsecrated several times to be used for other purposes and then reused for worship, undergoing several changes. In 1792 it became the town’s theatre, was was then returned to worship in the mid 19th century after several restorations, which mainly affected the interior decorations, and was again deconsecrated at the beginning of last century to be used as a ballroom and cinema until 1968.   Due to poor maintenance, the roof and the ceiling collapsed. This led to a state of disrepair of the building as a whole and, inter alia, to the gradual and definitive deterioration of most of the internal stucco decoration.  In 1991, major renovation work was initiated, during which the interior was partially modified - including the restoration of the remaining stucco - and the roof was rebuilt. The building was later permanently assigned as a municipal auditorium and during the visit of the then President of the Republic Carlo Azeglio Ciampi in 2001, it was named after Guido Calogero, the philosopher, essayist and politician who was confined in Scanno during the fascist period for his strenuous activities in opposition to the regime.

The building, set back from the road, has a plastered facade which reproduces the pattern which is characteristic of the churches of Scanno. It has a horizontal crowning and is divided into two bays by a cornice. At the sides are a double row of pilasters made from Tuscan stone and it is characterised by the unique decorative elements of the entrance and a rectangular window at the top. The doorway has a double frame and an architrave which is surmounted by a curved broken pediment. At the centre is an empty niche, in which there would have been a painting. The window, in a 16th century style, is supported by two ledges which are decorated with the motif of crossed bones - the iconography typical of churches dedicated to the Souls in Purgatory - and is topped by a pediment that matches that of the portal. On the right-hand side of the facade, set against a narrow wall and perpendicular to the adjacent building, there is a small door which allows access to the side entrance of the church. On top of this there is the small bell tower, probably built during the restoration work carried out in the mid 19th century.

Above the entrance is a masonry choir. The interior has a rectangular hall with a barrel vault, and a triumphal arch leading into the presbytery, where there is the only altar in the church, adorned in the gable end by two statues of female figures, on either side of a rectangular window. The original decorations that adorned the side walls, made in the mid 19th century by the Scannese artist Gaetano Ciarletta and which include a succession of pilasters painted with faux marble, are well preserved only in this area. There is also an elliptical dome while the rest was largely lost during the years of neglect following the collapse of the roof and the vault, which occurred in 1968. Along the walls run two wooden balconies with iron railings - accessible via spiral staircases positioned at the base of the triumphal arch - which were added in 1991 as part of the work required by the new use of the building as an auditorium.