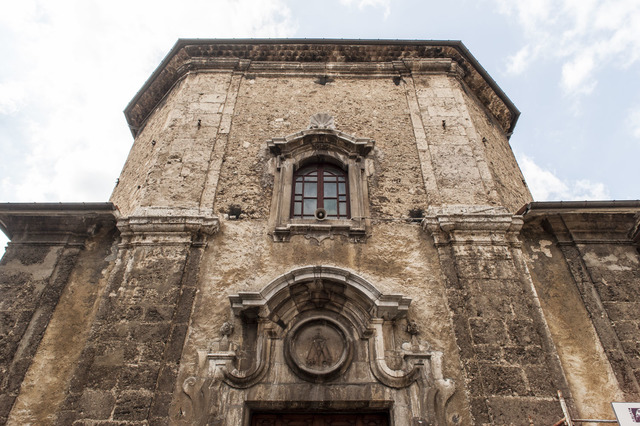 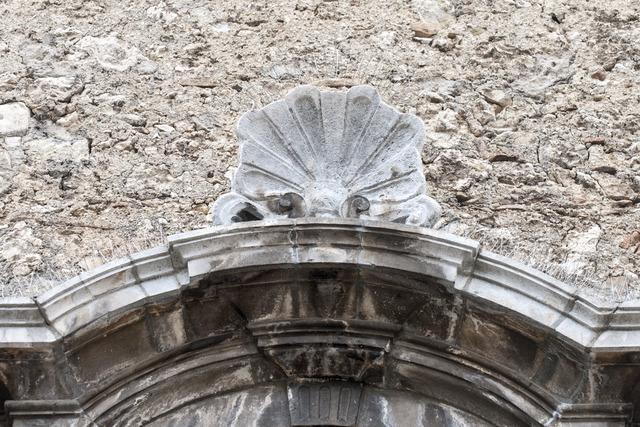 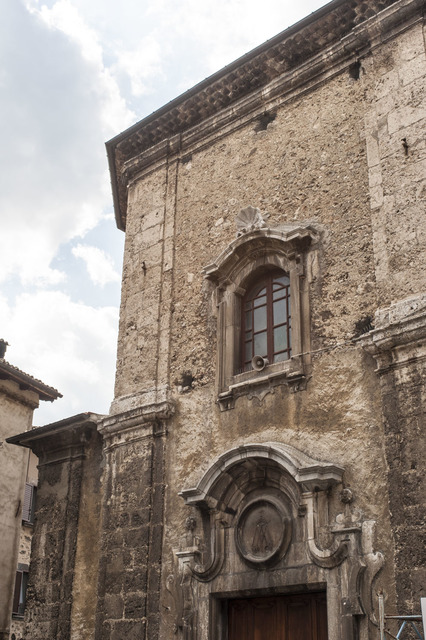 The 18th century church of Santa Maria delle Grazie - an interesting octagonal shape, is unique in Scanno and among very few in Abruzzo.  It owes its present name to the brotherhood of the same name, active in the village since the 16th century, and which in 1913 moved its headquarters to here from an ancient and no longer adequate Santa Maria delle Grazie, which is located between Via Silla and Via Ciorla, near the porta della Croce.
Originally entitled to Nomi di Gesù e Maria, it was known for a long time in the village as a church of the Pious Schools or Scolopi - the religious order founded by St. Joseph Calasanz (1566 -1648) in order to give instruction to the poor.  It was, in fact, attached to the college founded by the Piarist Fathers in 1713, a building which was finished in 1730. Three years later (in 1733) the construction of the church was begun under the famous artist from Pescocostanzo Panfilo Rainaldi (1683-1772), and who in 1732 was in Scanno in order to work on the main altar of the parish church of Santa Maria della Valle. The work lasted for several years and saw the contribution of talented artists such as the Lombard Pietro Piazzoli, who was hired in 1759 to complete the decoration of the interior, which was richly adorned with the fine stucco work which characterizes it today.   He was also probably responsible for the two side altars as well as the main one. Completed in 1760, the sacred building was opened for worship the following year.
Following the Napoleonic suppression of the order in 1809, the building that housed the convent became the town hall, the police headquarters, the district prison, the judge's residence and was eventually bought by individuals for use as a house.
The church, after the departure of the fathers, had many changes in fortune. Between the 19th and 20th centuries, due to poor maintenance and damage from the earthquake of 1915, it was repeatedly closed, restored and later reopened. Currently it is temporarily closed again, awaiting renovations.

The interior has a central floor plan covered with an octagonal dome. The main part of the room extends into the presbytery to form a square room with a pseudocupola. It has precious decorative stucco, with frames, cherubs and scrolls of fine workmanship. The central vault, painted by Filippo Ballerini and Arcangelo Centinanti during the renovations of 1913-14 - implemented to accommodate the Brotherhood of Santa Maria delle Grazie - shows delicate stucco, gilding and frescoes representing the four Evangelists. On the sides, small niches, at the ends of the diagonals of the octagon, alternate with two chapels on the transverse axis where there are valuable altars in the elegant stucco gables, attributed to Piazzoli. In the left-hand one which is dedicated to St. Francis of Paola, a triangular pillar supports the broken pediment decorated with a pair of cherubs. There is also a painting of the saint by Andrea Manei (1764). The altar on the right, similar to the other one, has a good quality canvas, painted in 1767 by Domenico Raimondi, of the founder of the Piarists, St. Joseph Calasanz, surrounded by children - an allusion to the mission of the Saint, creator of the first free public school. In the niche of the main altar, also attributed to Piazzoli, from 1907 right up to the current closure of the church, there was a statue of Our Lady of Grace, from the previous church dedicated to her, which replaced an 18th century painting of the Circumcision. Today the statue is kept in the parish church of Santa Maria della Valle.

The church is located along one of the stepped streets which are characteristic of this village, and looks out onto an open space. The rear leans against the building that was once home to the college. The facade, with the elegant 18th century portal in the middle, is topped by a rectangular window with gable ends and crowned by a shell. This distinguishes it from the other churches in Scanno which are usually horizontally crowned with two bays divided by a cornice. It does have, however, an extended lower zone with the addition of wings - divided by two pairs of pilasters in stone blocks, alternating with plastered surfaces and concluded by projecting brackets. The central portion - with rounded corners - is higher with a second row of pilasters up to the cornice with a "romanella" motif giving a special impetus to the whole.