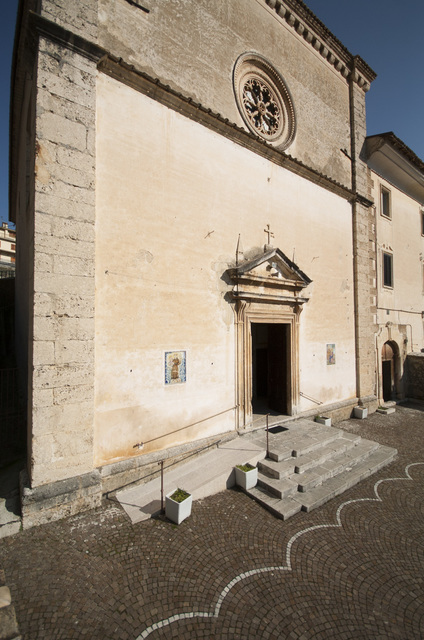 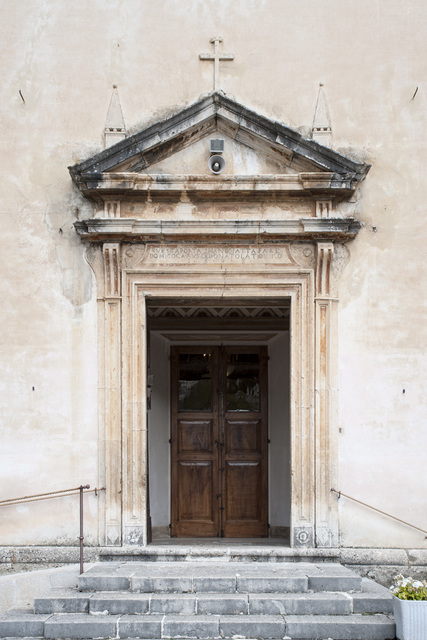 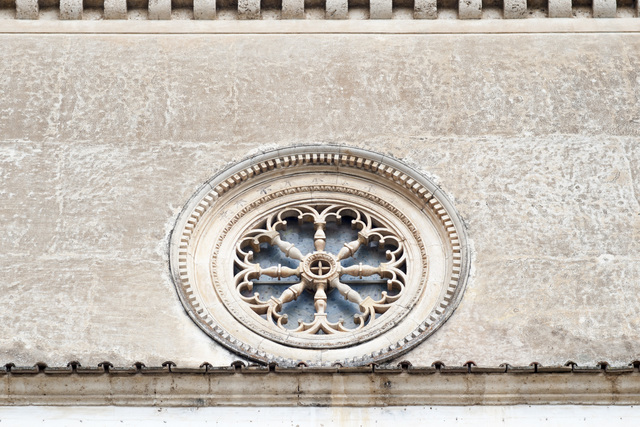 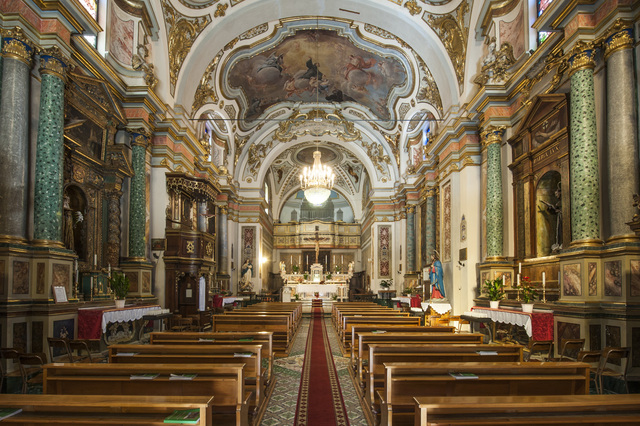 The church, dedicated to the saint from Padua, is located in the piazza  between Viale del Lago and Viale degli Alpini - in the neighbourhood of De Contra.  It was originally, together with the adjoining convent, outside the inhabited area of the village. This area was where the old hospital was and also where, on 25th August 1590,  the act of foundation of the church and the convent, with a competition of the University of Scanno, was agreed between Bishop Carusio of Sulmona and Master Stefano from Castelvecchio Subequo from the Order of the Minor Friars, which granted the monks the perpetual use of the building with the adjacent land.
The principal building of the hospice was enlarged in the 17th century to house the monastery and was again modernized in the early 19th century. After the Napoleonic suppression of the religious orders it was abandoned and parts were sold to individuals in 1865. The convent was restored in 1938 - encouraged by the local population - and one wing of the building was inhabited until 2006.
The church was built between 1595 - the date affixed to the portal - and 1596, and was enriched in the early 17th century with sumptuous altars and stucco. During the following century the interior was further enriched with fine wooden furniture and the frescoed ceiling, which was created by Giambattista Gamba, an artist working in Abruzzo in the first half of the 18th century, who was also responsible for the frescoes on the vaults of the Church of SS. Annunziata in Sulmona and also that of Santa Maria del Colle in Pescocostanzo. Further modernization was carried out during the 19th century and between 1984 - 1985 a complete restoration of the interior was completed.

The building has a longitudinal floor plan and a single nave with a barrel vault. Its sumptuous Baroque style is embellished with rich stucco, gilding and precious frescoes. At the entrance there is a painting of the ‘Institution of the Three Franciscan Orders’, painted in 1607, by Pasquale Prico of Montereale. On either side of the aisle are three chapels, each with an altar between columns encased in plaster painted with faux marble and decorative composite capitals. The second one on the left has an altar dedicated to St. Anthony from 1602. Above the niche where a statue of the saint is located, there is a painting of the Annunciation, from the 16th century. The wooden altar in the chapel opposite houses the statue of St. Francis of Assisi and was built in 1944 by local craftsmen working under the Scannese architect Liborio Caranfa. Underneath is the urn of Santa Filomena. On the walls that separate the chapels are the Stations of the Cross, dating back to the 18th century, while the confessionals and the wooden pulpit above are contemporary. The frescoes decorating the vault are by Giambattista Gamba - a painter trained in Naples who was active in the first half of the 18th century in other towns in the region. Starting from the entrance they are St. Bonaventure and St. Anthony receiving the Eucharist, St Anthony of Padua receiving the child from the hands of the Virgin and, finally, the glorious transit of St. Francis of Assisi. A large semi-circular triumphal arch separates the chancel area with a cross vault with lowered central dome. In the centre is the marble altar, which was purchased by Gaetano Di Rienzo in 1835 on the occasion of the restoration of the church and which was originally designed for the chapel of the Regia di Caserta in the 18th century.

The church is accessed from a piazza which has a central stone cross-obelisk which was erected in 1948 on the 10th anniversary of the return home of the monks. It is joined to the right-hand side of the building that used to house the convent. The facade is plastered on the bottom and enclosed within angular stone pilasters in the Romanesque style of the province of L’Aquila. It is horizontally crowned, with two orders separated by a cornice and a rose window in line with the portal. The 16th century portal has an architrave and is framed by a double carved stone frame. Above it is the inscription that bears the names of clients and the year of construction (1595). The top carved projection is supported by a pair of brackets and is surmounted by triangular gables with two small pinnacles in bas-relief on the sides. Above is a carved cross. Above the cornice, the Medieval rose window has strongly splayed concentric circles and the wheel is formed by trefoil arches connected by eight columns radiating from the centre.