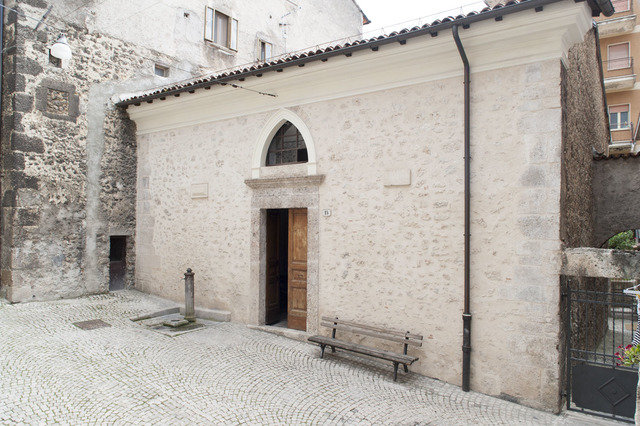 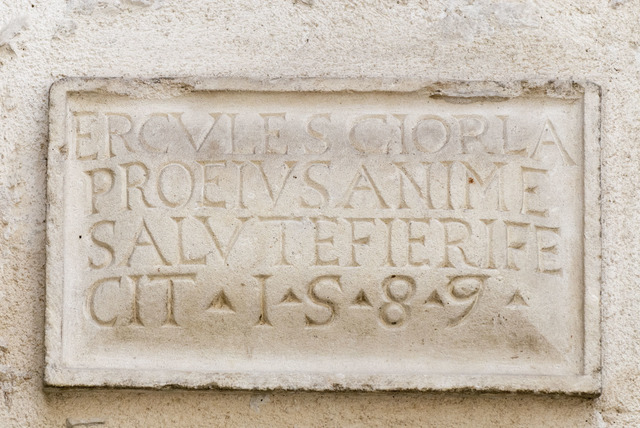 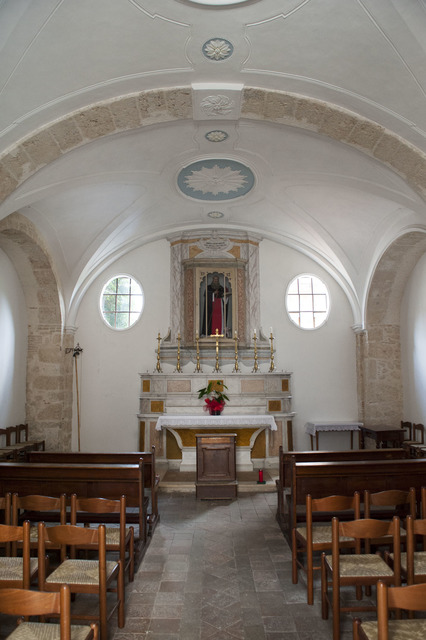 The church, dedicated to Saint Anthony Abbot, is called ‘Barone’ by the inhabitants of Scanno, mainly to distinguish it from that of Saint Anthony of Padua who is celebrated on June 13th.  It was originally outside the primitive walls, which in medieval times encircled the upper part of the village, the Vecchia Terrra, which was the original core of the village. It was founded - presumably along with the the homonymous Abbey, which then disappeared and on whose ruins arose some of the homes that exist today on the Strada Ciorla - by the order of the Hospital Clerics of Saint Anthony of Vienna.
The year of the foundation of the building is uncertain: the date indicated on the plaque on the right-hand side of the portal states 1569, recalling that in that year ERCULES CIORLIS PRO EIUS ANIME SALUTE FIERI FECIT (HERCULES CIORLA FOR THE SALVATION OF HIS SOUL BUILT IT ).  This date in fact it refers to a restoration, because we know that the church already existed in the early 16th century.
At the end of the 18th century, after the suppression ofthe order, the church passed into the possession of the Royal Constantinian Order of St. George and was ceded in perpetual lease, with an option to purchase, to the brothers Nunzio and Francesco Di Rienzo, who belonged to the most affluent family of the village.
In 1850 the building, which had been badly damaged, was restored on the initiative of the brothers Antonio and Adriano Di Rienzo, who also re-established the ancient custom of the distribution to the villagersof "sagne with ricotta" (strips of white pasta seasoned with dry ricotta), which took place on the feast day of the saint, on January 17th. This tradition, which occurs in various rites linked to the cult of Saint Anthony, and found mostly in the Abruzzo region, is still alive in the village.
Additional building renovations carried out in 2000 consisted mainly of the removal of the plaster that covered the facade and, inside, in the restoration of the brick floor.

The interior, with a single hall and a rectangular floor-plan, has plastered surfaces on which the stone architectural structures stand. In the central area there is an arch with a low profile which divides the church into two spatial cells, covered by barrel vaults with lunettes. The side walls are punctuated by deep, blind, semi-circular arches set on sturdy pillars. At the centre of the apse wall is an altar dedicated to Saint Anthony, flanked by two oval windows. Above the altar, a glass case holds the statue of the saint depicted, according to the traditional iconography, in the guise of an elderly monk with a long white beard and the sign of "Tau" in red (symbol of the cross of Christ) sewn onto a dark coat, in the manner of the clerical order of Anthony of Vienna. He carries in his right hand the pilgrim's staff topped with a bell - the Antonians announced themselves with the sound of the bell during their journeys and the collection of alms. His other hand holds the open book of the Holy Scriptures, topped by a flame which alludes to both the protection against the disease of shingles (known in Italian as "Fire of Sant 'Antonio"), and the salvation from hellfire. The piglet represented at his feet is another typical attribute of the iconography of the saint: its presence refers to the breeding of pigs by the monks of Vienna, whose fat was used to treat the "shingles" .

The facade, with horizontally crowning masonry and opus incertum, is closed at the sides by corner cantonal blocks of stone. Starting from the right there is an architrave that, crosses a narrow passageway, leans up against a pier which is walled into the adjacent building, while the left-hand side leans up against a private building in rough stone. The facade has a central portal with an architrave in simple rough stone, topped by a ledge, over which there is a lancet fanlight. On either side of the portal, two inscriptions carved on stone slabs commemorate the restorations of 1569 and in 1589 respectively.