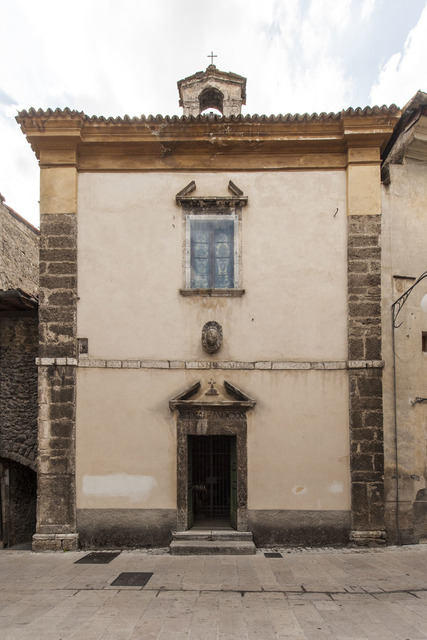 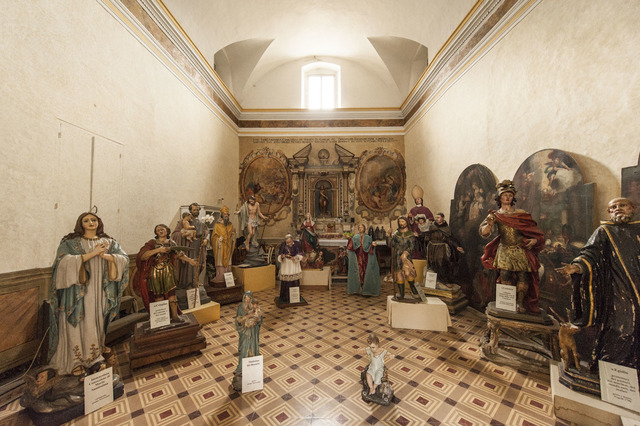 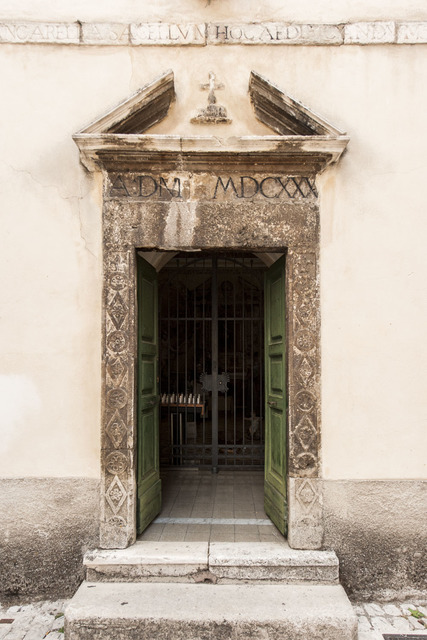 The small church dedicated to St. John the Baptist is located along Via Silla. We do not know the exact year of its construction but it is mentioned for the first time in the report of the pastoral visit of 1612.  We can therefore conclude that the date of 1630 (MDCXXX) - located on the portal - and also that contained in the inscription affixed to the frame of the facade - recalling that in June 1631 (MDCXXXI) Giovanni Antonio Ciancarella fece edificare a sue spese il tempio (built the church with his own funds)  - would have both referred to restructuring funded by the illustrious Ciancarelli family who owned the building opposite and who were, for a long time, patrons of the sacred building.
Some scholars have speculated that the original church was built in the first half of the 16th century as suggested by two other inscriptions placed inside - one above the altar (1540) and the other on the window of the sacristy (1545).
On the front, at the base of the left-hand pillar, is a re-used slab of limestone containing a Latin funerary inscription, dating from between the 1st century BC and the 1st century AD, which has attracted the interest of local scholars.
In the past the church was used for various purposes: as an elementary school, a theatre (1916) and, until the middle of last century it sheltered the pilgrims of San Domenico of Sora, directly connected to the holy sites of the Valle Sagittario and Cocullo.
Since 1998 the building, which is still consecrated, has been home to the religious section of the Wool Museum, which was opened in 1996 to collect and preserve objects and artefacts of the pastoral culture of this village. Here however, numerous religious statues from between the 17th and 20th centuries are on display. These objects of worship by the population of Scanno were collected together from the various village churches. Mass is celebrated here only once a year, on June 24th, the feast day of St. John the Baptist.

The church, which overlooks the square of the same name and the Palazzo Serafini - Ciancarelli, leans on the right against a private residence and to the left against a semi-vaulted support of the adjacent building. The modest plastered facade, is similar in style to most of the churches in Scanno: it has a horizontal crowning, enclosed stone corner pilasters and is divided into two levels by a cornice. The architrave of the portal has a simple frame in rough stone, topped by a tympanum with a cross carved in the centre, below which is the date MDCXXX. Above the cornice is the coat of arms of the Ciancarelli family, showing the leg of a shrimp - known in dialect as a "Cianca" - with the motto "Pungo non ungo." In the upper span is a rectangular window which is topped, as is the portal, by a broken pediment. The central bell tower has a single cell.

The church has a hall with a barrel vault and lunettes and a small lobby with cross vault and a wrought iron gate at the entrance. Beyond here are statues which are still venerated - especially those of San Biagio, (in wood from the mid 17th century), Our Lady of the Holy Souls in Purgatory (in wood and plaster, 1841) and the Immaculate Conception (in paper mache from the early 20th century). The only decorative elements of the interior are the high altar - which houses the valuable statue of St. John the Baptist - and two interesting frescoes in large medallions at the sides. The entire structure, including the statue of the saint, was built in 1698. The frescoes, which are on the left St. Elizabeth giving birth to John the Baptist and on the right the beheading of the saint, had been covered following the great plague of 1764 when the church was used as an isolation hospital. They were uncovered in 1947 and restored by the scannese painter Nicola Berardi, to whom we owe the depiction on the right of the head of the saint, which had been lost.