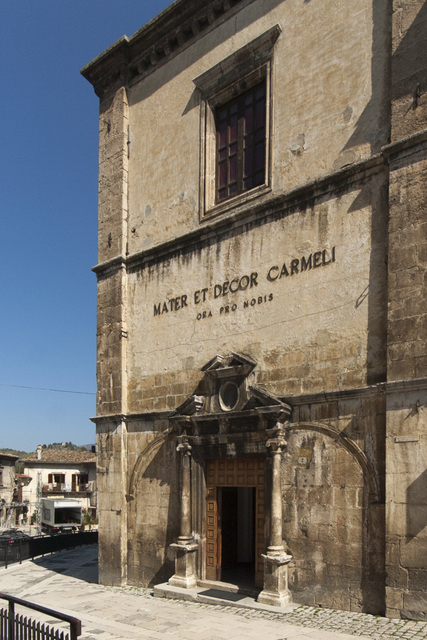 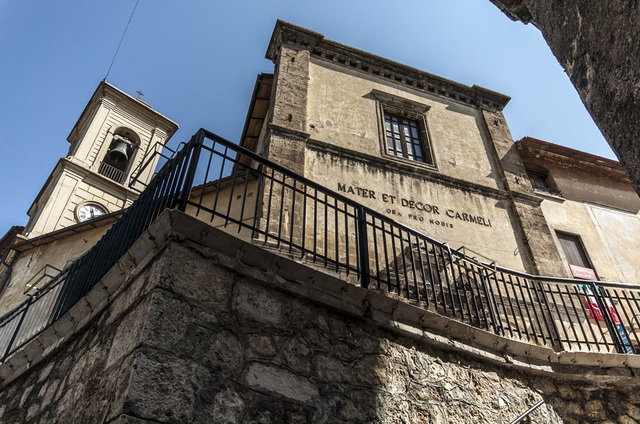 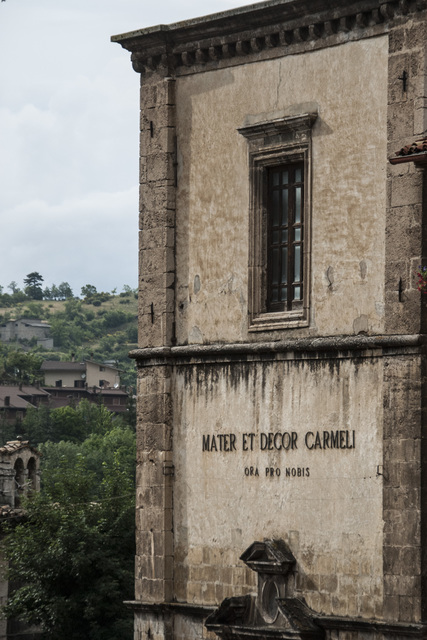 The sacred building, located on the slope of San Rocco, near the piazza of the same name, is known as the Carmelite church, since it is the seat of the brotherhood of the same name - guardians of the statue of the Madonna del Carmine, who is particularly venerated in the village. In fact it is celebrated on the third Sunday of July with a solemn procession through the narrow streets of the village, which involves numerous brotherhoods from various villages. Here the statues of the dead Christ and Our Lady of Sorrows are kept, which are paraded on the evening of Good Friday in an impressive procession, accompanied by the music of a moving Miserere.
The church is the result of two different churches: the SS. Sacramento, which stood where this  building is today and the ancient San Rocco, which one entered from largo dell’Ormo, in the area above the building and currently adjacent to it. There is no definite information about the original churches however that of San Rocco is mentioned in documents dating back to the early 16th century, describing it as having many chapels and a baptistery. Both were demolished and unified to form the current building - probably in the late 17th century.
The building has changed over the centuries, including the demolition of the medieval bell tower in 1909 - to allow for the passage of lorries along the road to Barrea - and replacing it with the current one two decades later.

The facade, which is partly plastered, is divided into three orders by two stone cornices, and therefore differs from the more popular two-span model of Scanno. It is enclosed within angular pilasters, ending with a crowning of stone ledges, such as is also found in the church of Santa Maria della Valle. The current portal, in the 16th century style, has two smooth Ionic columns on the sides resting on tall pedestals. It is surmounted by a broken pediment, at the centre of which is a similar motif, and which has an oval medallion with traces of a fresco depicting the Virgin. Either side of the portal there are two quarter-circle frames, presumably the remains of the arches of the portico that led to the original church of SS. Sacramento. In the middle portion of the facade sis a Latin inscription with the invocation to the Virgin of Carmel: MATER ET DECOR CARMELI ORA PRONOBIS. Under the cornice is a rectangular window. On the facade of the adjacent building is a giant fresco depicting Saint Christopher. The tripartite, square, bell-tower, visible to the left of the church facing Piazza San Rocco has, at the bottom a niche containing a stone statue of San Leonardo, in the middle a clock and then above the belfry with an arch.

The church has a longitudinal floor plan with a single nave and an atrium porch with three round arches covered with many small vaults. On the right side as you enter, on the wall of the counter-facade were elements reused from the existing building. These include a little window for alms, boxed in a stone frame carved with scenes from the Annunciation with angel heads - presumably dating from the 16th century - and the plaque on the left, which commemorates the reconstruction carried out in 1565. The wooden choir set higher up, in carved and gilded wood, houses a precious organ from 1763. Along the plastered walls are gilded elements that enhance the decoration - cornices, pilasters with composite capitals and a carved entablature, above which are barrel vault with lunettes and windows with low arches. Above the marble altar, against the wall to the right, is the statue of San Rocco, joint titular saint of the church. The popular saint and miracle-worker is represented here, according to traditional iconography, in the act of pointing at the sore on his thigh and dressed as a pilgrim. Along the left wall is the altar on which is a statue of Our Lady of Sorrows. Under the table, within a glass case, is a statue of the dead Christ. On the same side, moving towards the presbytery, is the wooden pulpit from which local tradition states that St. Bernardino of Siena preached during Lent of 1423. Below is a finely carved wooden confessional of note, probably from the late 18th century . The raised presbytery area ends with a semicircular apse covered with a dome and decorated with stucco lozenge and rosette motifs. On the main marble altar, a gabled niche houses in a glass case the wooden statue of the Madonna del Carmine, from the Neapolitan school of the 17th century, donated to the brotherhood by Francesca Tocco, princess of Scanno, in the second half of the 17th century.