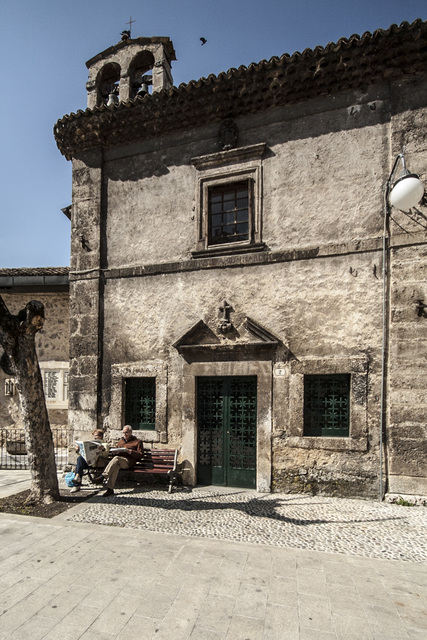 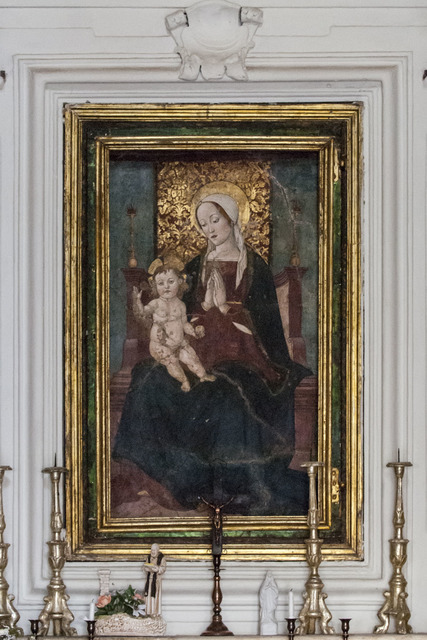 Located on one side of Piazza San Rocco, the oldest in the village, the church of Santa Maria di Constantinopoli is known for its fine 15th-century fresco of the Madonna and Child.
We do not know the exact year of construction of the small church, but we presume that the foundation of the building is from the first decades of the 15th century. That view is supported by the fresco of the Madonna and Child which bears the inscription De Ciollis + AD 1418.
The building was restored following the damage allegedly suffered in the earthquake of 1706, as can be deduced from the inscription on the string course: IOHANNES ET MARINUS DE FAMILIA NARDOTY ANNO 1708.  The cornice made with rows of protruding tiles however relates to the following renovation during the first half of the 19th century.
The church was privately owned until 1960 when it was donated to the parish of Santa Maria della Valle.  In that year the church was both cleaned and the interior painted.

The façade - framed by massive pilasters of squared stone - is divided horizontally into two levels by a cornice. Below is the main entrance way to the church with a broken triangular pediment flanked by two simple rectangular windows. In the upper level there is an elegant stone window crowned with horizontal mouldings.

The interior is a simple, rectangular room covered with a barrel vault. It is adorned by a fresco of great artistic quality representing the Madonna and Child Enthroned. At the centre is a golden throne with the figures of the Madonna and Child enhanced by a background that looks like a red cloth with golden floral patterns. The grace of the lines, the delicacy of the faces, the vividness of the colours - brought back to its original freshness by the restoration of 1981 - is reminiscent of Sienese art of the 15th century. What we do not know is whether the name De Ciollis, quoted together with the date of execution of the fresco, refers to the painter or to the person who commissioned the painting.